Aberrant activation of Wnt/β-catenin signaling pathway, due to the genetic or epigenetic modifications, is chargeable for tumorigenesis in epithelial cells of differing types of most cancers akin to colorectal most cancers. Secreted Frizzled-Related Protein-1 (SFRP1), as one of the antagonist proteins of this pathway, is hyper-methylated in colorectal most cancers main to the formation of Wnt-Fz-LRP and activation of Wnt/β-catenin signaling pathway. We aimed to design antagonist peptides based on SFRP1 structure in opposition to wingless-type 2 (Wnt2), a extremely expressed ligand in numerous cancers like colorectal most cancers, to inhibit the formation of the preliminary triple complicated of Wnt-Fz-LRP. After homology modeling of SFRP1, molecular docking confirmed that Wnt2 and SFRP1 work together in the identical mode of xWnt8-mFzEight and hWnt3-mFzEight by way of the thumb and finger binding websites.

These binding websites had been chosen for designing peptides utilizing both substitution or deep learning-based approaches. The effectivity of every designed peptide in interacting with Wnt2 was evaluated by molecular docking. Stability evaluation of Wnt2-peptide complexes by way of molecular dynamic (MD) revealed that the designed peptides may successfully work together with Wnt2 binding websites throughout the simulation. However, the designed peptides in opposition to the thumb website had greater binding affinity and hydrogen bonds in contrast to the preliminary sequence. The secondary structure of the designed peptides indicated an alpha-helix structure which is a good structure for peptide medication. Computing the physicochemical properties of peptides predicted a reasonably acceptable structure which made them promising candidates in the remedy of cancers like CRC.

Secreted frizzled-related proteins (SFRP) are glycoproteins containing a so-called frizzled-like cysteine-rich area. This area permits them to bind to Wnt ligands or frizzled (FzD) receptors, making potent regulators of Wnt signaling. As Wnt signaling is usually altered in most cancers, it isn’t shocking that Wnt regulators akin to SFRP proteins are sometimes differentially expressed in the tumor microenvironment, each in a metastatic and non-metastatic setting. Indeed, SFRP2 is proven to be particularly upregulated in the tumor vasculature of a number of varieties of most cancers. Several research investigated the purposeful position of SFRP2 in the tumor vasculature, displaying that SFRP2 binds to FzD receptors on the floor of tumor endothelial cells. This prompts downstream Wnt signaling and which is, thereby, stimulating angiogenesis. Interestingly, not the well-known canonical Wnt signaling pathway, however the noncanonical Wnt/Ca2+ pathway appears to be a key participant on this occasion.
In tumor fashions, the pro-angiogenic impact of SFRP2 could possibly be counteracted by antibodies concentrating on SFRP2, with out the incidence of toxicity. Since tumor angiogenesis is a vital course of in tumorigenesis and metastasis formation, particular tumor endothelial markers akin to SFRP2 present nice promise as targets for anti-cancer therapies. This overview discusses the position of SFRP2 in noncanonical Wnt signaling and tumor angiogenesis, and highlights its potential as anti-angiogenic therapeutic goal in most cancers. Haemophilus parasuis induces extreme acute systemic an infection in pigs, characterised by fibrinous polyserositis, polyarthritis and meningitis. Our earlier examine demonstrated that H. parasuis induced the activation of p38 mitogen-activated protein kinase (MAPK) pathway, rising the expression of proinflammatory genes and mediating H. parasuis-induced irritation. Moreover, Wnt/β-catenin signaling activation induced by H. parasuis disrupts the adherens junction between epithelial cells and initiates the epithelial-mesenchymal transition (EMT).
In the current examine, p38 MAPK was discovered to be concerned in the accumulation of nuclear location of β-catenin throughout H. parasuis an infection in PK-15 and NPTr cells, by way of modulating the expression of dickkofp-1 (DKK-1), a damaging regulator of Wnt/β-catenin signaling. We generated DKK-1 knockout cell strains by CRISPR/Cas9-mediated genome enhancing in PK-15 and NPTr cells, and located that knockout of DKK-1 led to the dysfunction of p38 MAPK in regulating Wnt/β-catenin signaling exercise in H. parasuis-infected cells. Furthermore, p38 MAPK exercise was impartial of the activation of Wnt/β-catenin signaling throughout H. parasuis an infection. This is the first examine to discover the crosstalk between p38 MAPK and Wnt/β-catenin signaling throughout H. parasuis an infection. It supplies a extra complete view of intracellular signaling pathways throughout pathogenic bacteria-induced acute irritation. 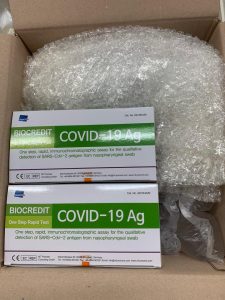 Wnt signaling dysregulation promotes tumorigenesis in colorectal most cancers (CRC). We investigated the position of PTPRF, a receptor-type tyrosine phosphatase, in regulating Wnt signaling in CRC. Knockdown of PTPRF decreased cell proliferation in patient-derived main colon most cancers cells and established CRC cell strains. In addition, the charge of proliferation in addition to colony formation skill had been considerably decreased in tumor organoids grown in 3D, whereas the quantity of differentiated tumor organoids had been markedly elevated. Consistently, knockdown of PTPRF resulted in a lower in the expression of genes related to most cancers stem cells downstream of Wnt/β-catenin signaling.
Treating PTPRF knockdown cells with GSK3 inhibitor rescued the expression of Wnt goal genes suggesting that PTPRF capabilities upstream of the β-catenin destruction complicated. PTPRF was discovered to work together with LRP6 and silencing PTPRF largely decreased the activation of LRP6. Interestingly, this PTPRF-mediated activation of Wnt signaling was blocked in cells handled with clathrin endocytosis inhibitor. Furthermore, knockdown of PTPRF inhibited xenograft tumor development in vivo and decreased the expression of Wnt goal genes. Taken collectively, our research establish a novel position of PTPRF as an oncogenic protein phosphatase in supporting the activation of Wnt signaling in CRC.